Start with a sketch, but make it quick. There’s real work to be done. – Stefan Hartwing

This is how #Woodchat’s Picture Inspiration! works.

JUMP TO THE CURRENT PICTURE FOR INSPIRATION

The first week, we started with a picture of shavings and came up with some really creative designs. 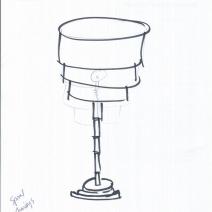 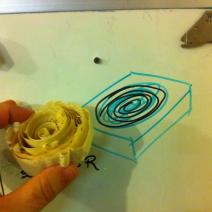 The second week, we examined a colourful scene from KaBoom! The Port Moody Art Explosion for inspiration.

In week three, we studied a photo of a metal bench that inspired a quilt rack built by Dyami Plotke.

The fourth week, our source of inspiration was a photo of an adjustable candle holder, that proved to be tougher to work with than we thought.

In week five, we looked at a photo of an art installation for inspiration.

For week six’s Picture Inspiration, our challenge was to design something inspired by this photo.

For the seventh week, Scott Meek brought us a picture of a North Carolina landscape.

Joe Laviolette brought us an exciting picture of a SR-71 stealth plane to inspire the eighth round of designs.

Andrew Arndts brought us a juicy picture for us to sink our teeth into on week 9.

I took this photo of my new block plane with trailing wedge for week 10’s inspiration.

For week 11, we have two pictures for inspiration. Create one design or two. Or more.

We are looking at this plane hammer to inspire our designs in week 12.

In the 13th week, Matt is challenging us with the Fifa World Cup logo and we are also bringing back the staircase with slide, if that inspires you more.

During week 15, we look to a Viking ship for inspiration.

For week 16, we are looking at the winning entry of the Reddit Picture Inspiration Contest.

Matt and I each brought a picture for week 17.

All material except where otherwise noted is original and copyrighted. Other than brief excerpts for the purpose of review or promotion, content may only be re-used with explicit written permission from Chris Wong.
Loading Comments...