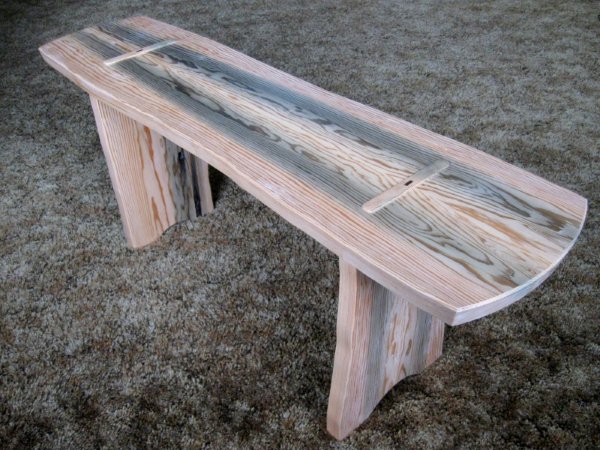 I have been working on developing a line of furniture for my company. Inspired by some Douglas Fir I found in my wood pile with green iron stains, I built this bench.

If you look closely at the inside of the left leg, you can actually see evidence of the square steel spike that was once embedded in the wood. I contoured the edge of the top to follow the grain and rounded over the edges as well as made cut-outs at the bottom of the legs to make feet. Then, I router out through-mortises and cut tenons on the ends of the legs to fit. I glued the bench together, then trimmed the through-tenons so they were 1/8″ proud. Such a slight protrusion really adds a lot of interest to the bench, while not being uncomfortable. 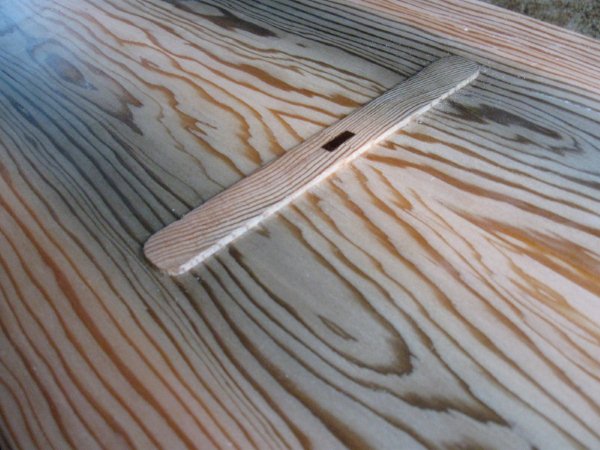 With testing, I quickly learned that the legs were too far towards the center, so if someone was sitting at the extreme end, it would tip. Also, not many people were fans of that through tenon I liked so much. They criticized that it looked machine made, with the round corners. I also heard that it looks uncomfortable, and regardless of how it feels, that might be enough to put some people off.  There was a slight bit of racking, if I really, really stressed the joint. However, over time, with more use, this might become more of an issue.

The next version I have designed is being built in soft (Western or big leaf) maple. While softer than hard (Eastern or sugar) maple, it is still much harder than Douglas Fir. There are a lot of differences between this prototype and the last. Everything is thicker, more massive. The bench is a little longer, and the legs are located further outwards. More importantly, the legs are splayed. The legs are still joined with through tenons, however, the single round-ended tenon has now become a set of three rectangular tenons. To rout the angled mortises, I made a jig and tapered the underside to cut the mortises at the proper angle. 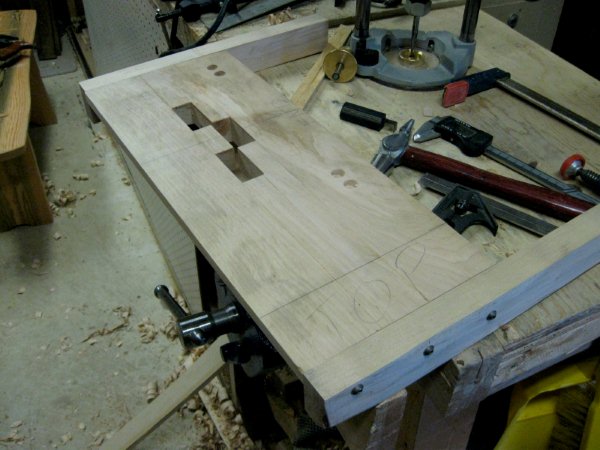 The router left mortises with round corners, so I used a specially-designed chisel designed to square the corners. 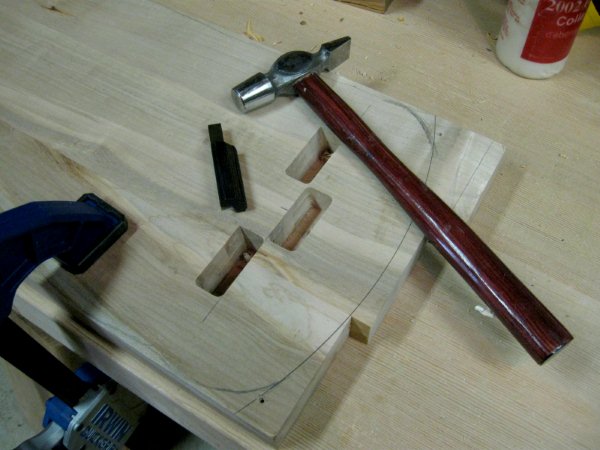 After cutting the mortises, the next step was to cut the tenons to match. It was a slow process, involving a whole lot of test fitting and trimming with chisels. Eventually, the tenons fit well and I assembled the joint. I glued it together, then trimmed the protruding tenons flush. I felt that the tenons didn’t stand out enough, so I used a card scraper to cut a narrow recess which I later filled with epoxy. I dyed the epoxy black with “Lamp Black” Universal Tinting Colours which I got from my local hardware store in the paint department.