For years, my friend and lumber hook-up Dave has been using a hastily-designed rack for his chainsaw chains. Made of Pacific yew, it is sturdy enough and looks very nice with beautiful colouring and two live edges. However, it doesn’t stand up on it’s own and doesn’t fare much better when propped up against something, so it often lays down on one face. A chain threaded through holes at one end allow the rack to be hung. There are chains on each side of the rack – dull on one side and sharp on the other side. However, there is no easy way to differentiate the sharp from the dull, nor are there any provisions for keeping the chains on the dowel posts they loop around so they frequently slipped off and had to be wrestled back onto their respective posts. And there is no easy way to carry the rack other than by the same dowel posts.

So when Dave asked me to make him a new chain rack, I immediately had some ideas. I started by adding a cutout at the midpoint of the body to carry the rack by, where it would also be balanced. I went from dowel posts to elliptical blocks with eccentric caps, which when rotated 180 degrees, prevent the chains from sliding off. I kept the hanging feature as an option, but added a base to allow the rack to stand on edge. This allows access to both sides of the rack. And to differentiate the sharp chains from the dull, I made the body of the rack from two pieces of maple – one which I had dyed dark brown and one left natural.

I joined the base to the body with a long sliding dovetail. I cut the slot in the base with a hand-held router and a straight edge, wasting away the bulk with a straight bit, then finishing up with a dovetail bit. I milled the male part on the body using my table-mounted router, testing frequently to get a good fit. In hindsight, I should have made it a tapered dovetail, but I didn’t think to at the time. So I kept trimming down the dovetail and testing the fit. When it fit well, I started putting it together. Well, I got it about 6″ in and it started to get tight. What I should have done was pull the joint apart and trim it down some more. But I figured, it’s fit this far, so why won’t it go all the way? So I beat on it. And I beat on it more. It must have sounded like a pile-driver to the neighbors. Eventually, I got it together. Nothing split. And there is certainly no need for glue. And it looks awesome and works well to boot! 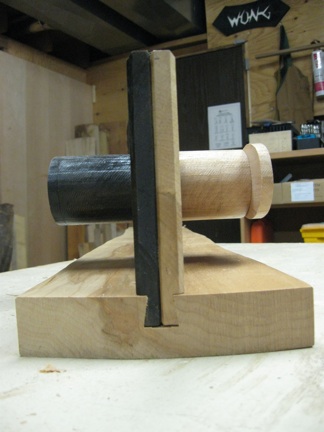