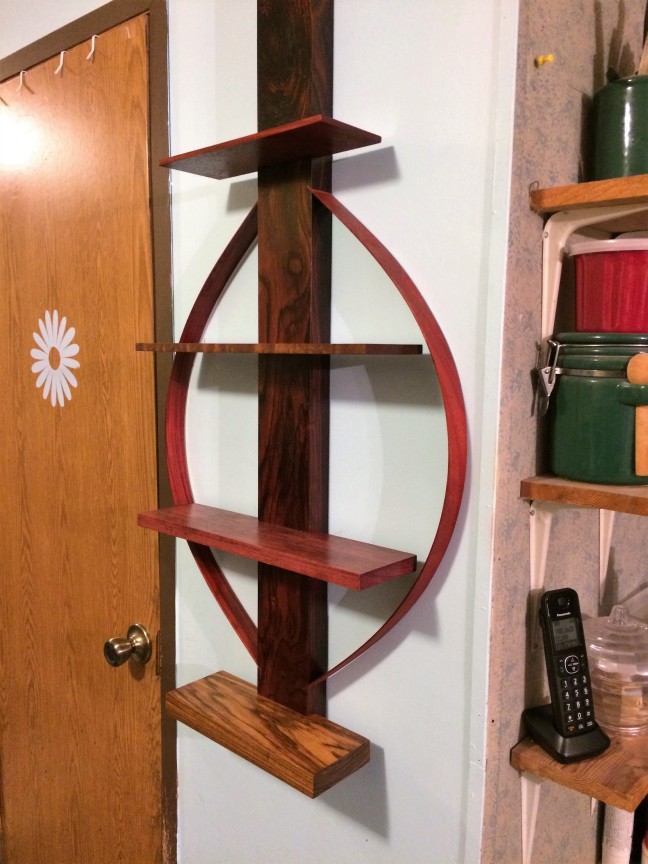 This is the shelf I came up with. I hadn’t decided on anything to make and went to my shop the morning of and examined the scraps I had to see what there was. I had initially wanted to do something with metal but I couldn’t think of anything that was an effective design, given the materials I had available. I settled on a piece of cocbolo that I had been having a hard time finding anything to do with because it isn’t the orange coloring I prefer I also used a piece of waterfall bubinga, a piece of padauk, and a piece of zebrawood, and a piece of purpleheart.

I thought I wanted to add some visual interest to the piece so I decided to make the shelves progressively thinner from top to bottom. I then found some thin strips and thought I could add some curves. That ended up being the greatest challenge because I had to find the right thickness and length without it breaking (which I broke several).

I was thinking maybe some speaker boxes could be a future build. Or possibly a tv console/low entertainment center. sofa table I dont know there are so many awesome possibilities!!

All material except where otherwise noted is original and copyrighted. Other than brief excerpts for the purpose of review or promotion, content may only be re-used with explicit written permission from Chris Wong.