I realise that it’s been a full month since I’ve written here. But I’ve been busy. Haven’t we all? As always, there’s day-to-day life. On top of that, there are the holidays looming over us. But for me, I have another task to keep me busy – starting a business.Upon completing high school, I told myself that I would take a year off and just work while pondering my future. That was the fastest year of my life.

While working at Lee Valley, I met valuable contacts and also got a few jobs. That’s all good and well, but there was something lacking. Three years later, I am ready to take the next step in life.

December first, I received a letter from the government. Good news. The letter was a letter of approval for a business name. A week prior, I had sent off a form requesting the approval of my business name. I sent in three names, but there was really only one I wanted. And that was Flair Woodworks. The other two were Flair Woodwork and Flair Woodworx. My first choice was approved. Great! I registered a domain name for the company’s official site – http://www.flairwoodworks.com.

Next step: register the business as a sole proprietorship. At OneStop’s website, I was able to register my business and get all the licences required in a couple hours. Over the next couple days, I received the licences and other paperwork (tax documents!) by mail.

With the legalities out of the way, the next logical step was to design business cards and a website. Months ago, I had put together a logo which I really liked. So I put the logo in the top left corner of the card. Then I added a description of what I do below, then my contact information below that. The top right corner was the perfect place to put a picture of a workpiece, so I collected some good pictures of my work – the wooden block plane and the treasure chest – and edited them to suit. My first set of sample cards was done. I showed them to some trusted friends and immediately got feedback.

Some feedback was: “Nice work, I like this one.” Other feedback was much more helpful: “This picture is too dark” or “Your font is too big”. Quickly, I learned who I could rely on honest, unflattering feedback. You know who you are – thank you oh, so very much. I assessed the feedback I got as well as my gut feelings and came out with set number two. Set number two had six images.

Once again, I canvassed my friends, including everyone at work. I got a lot of help, and everyone was able to point out at least one they really liked and one they really didn’t like. Two of the pictures, the block plane and screwdriver were hard to recognize to non-woodworkers. So they got pitched.

Three of the other four cards were all popular.I decided that I would print three or four cards. The text on each would be the same, but each image would illustrate a different skill set. Also, my reasoning was that if someone hands you a business card, you take it and stuff it in your pocket. If I hand you three and say, “Here, pick one.”, that makes you think. Now you’re involved and your brain is forced to look at the cards and hopefully make a connection between me and my card. Face it – how many times have you pulled a card out of your wallet and not remember where you got it?

Someone suggested that I add a background of some sort – perhaps wood shavings. A plain background is too bland, not to mention common. So I went down to the shop and made shavings. Nice long, curly shavings of Douglas Fir off of a 25º blade in my low-angle jack plane. I built mounded a pile on my bench and photographed it. I loaded it onto the computer as a background and found that it was both too dark and busy. So I cropped the image and brightened it up. Much better.

The other critique I was getting was on the flame over the “i” in Flair. “Fire is destructive to wood” someone said. “What’s your slogan: Good Enough to Burn?” prodded another friend. I suppose it was a misplaced metaphor, as a few people noted. So the fire got replaced with a less destructive image – circular saw blade. That didn’t last long and soon got replaced with an alder leaf.

Once again, I sent out the samples. There were over six waves of business cards, each getting better and better. I spent well over forty hours working on the cards and am now happy with them.

The final step was to get a phone number. I sat on the fence about getting a landline or a cell. It would cost more to bring in a landline than to buy a cell, but I really don’t like cell phones. Maybeit’s the way some people use them that I can’t stand. Or maybe the stigmatism associated with them. Either way, I wasn’t too enthusiastic about a cell phone. How did I decide? Time, my friend. I knew that I wanted the cards before Christmas, and there was just no way that I was going to get a landline on such short notice. So… yup. I added my cell phone number to the three cards I decided on and now they are complete: 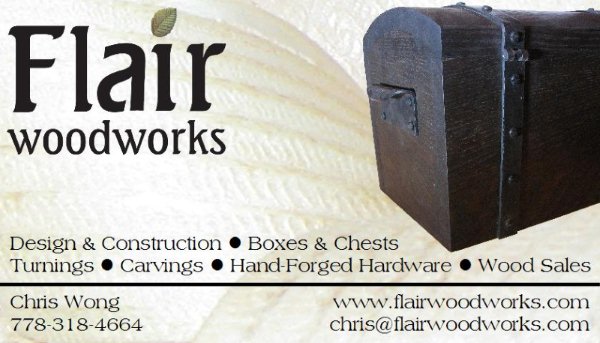 Now to get them printed. Today is the Saturday December 20th. It would be really, really nice to have them in time for Christmas. When else do you see and meet so many people? I had gotten a recommendation from a friend for a company who does a great job at an outstanding price – Unico Print Media. But they’re closed until January fifth. I asked around a three big printing companies, but their turn-around time was 5-7 days.

Finally, the last place I was going to try before researching colour printers, promised two or three days. Monday possibly, Tuesday for sure. Great. I ordered 250 to get me through the holidays. In the new year, I’ll order a gross from Unico.  Website design is way over my head. Fortunately, I have a cousin who is much more adept than I, so I handed over the reins to him. He has been working to design a site to suit my needs. I provide the ideas, he makes it happen. No, the site is not ready yet. But the e-mail works, as does the cell phone. Would you like to talk about a project you might have for me? Drop me a line!