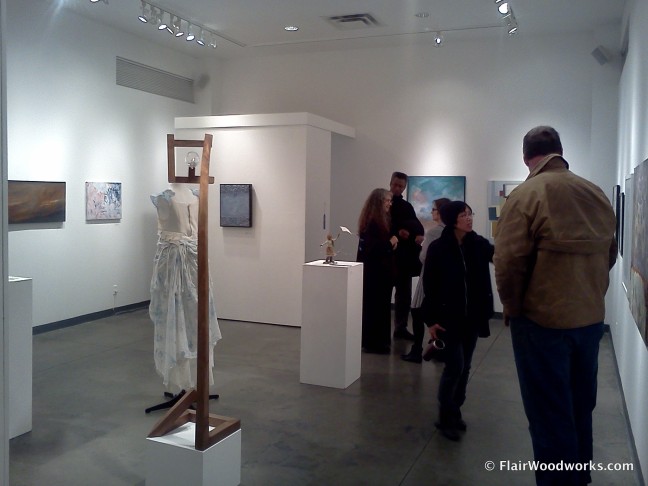 Last Sunday, I was at the Opening Reception of Discovery: Air at the Seymour Art Gallery. Wireframe Cabinet was on display in the middle of the room. The gallery was extremely busy to the extent that it was quite difficult to move. I took this photo at the end of the day.

Although the cabinet was the only thing I was actually displaying at the gallery, I offered the use of a glass orb to illustrate its purpose as a display cabinet. I had designed the cradle of the cabinet to support a flat, cylindrical, or spherical object.

Wireframe Cabinet got a lot of attention, for sure. I hovered in the vicinity, watching to see how people interacted with the cabinet and ready to jump in to introduce myself and explain the piece.

More than one person told me that it was the best piece in the gallery. To those interested, I explained how I arrived at this design in a voice loud enough that others in the vicinity could also hear.

You know how cabinets tend to collect all sorts of stuff and become cluttered? I wanted to design a cabinet that would hold and display one thing, and one thing only.

People were very complimentary about the quality of woodwork and wanted to know if I did the glass work. I explained to them that the glass was just a found object that I happened to like.

Halfway through the Opening Reception, the gallery was still busy. I was standing next to Wireframe Cabinet talking to glass artist Larissa Blokhuis about the glass orb. She was explaining to me how it was made when somebody backed into the cabinet.

The glass orb rocked with it, then rolled over the edge of the cradle and out of the cabinet.

My eyes followed it down, but I made no attempt to catch it.

The orb hit the floor and shattered. The room went silent.

All heads turned my direction.

I was calm and unbothered by what had just happened. The fellow who bumped the cabinet kept apologizing to me; I kept telling him that it was okay, that it didn’t matter. We got the glass cleaned up and the reception continued.

But Wireframe Cabinet was empty. Without something being displayed, it seemed incomplete, without a purpose.

I took action. I asked the staff responsible for the food and drink if I could have a wine glass to break and they gave me one. I asked Larissa if she would help me transform the wine glass into something interesting. Outside, we broke the base of the glass and I set it in the cabinet, this time with a little sticky putty to hold it fast. 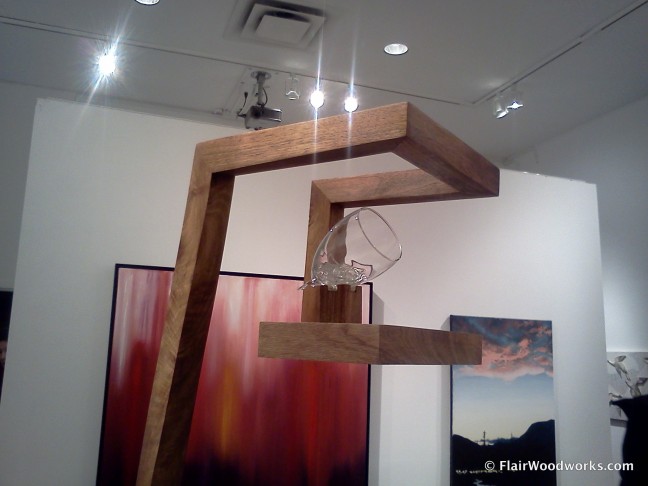 Afterwards, many people approached me and offered their sympathies or commented on how well I handled the situation. Honestly, I saw no reason to get upset. When the orb broke, I saw that as an opportunity to get involved and create something, a rarity at a gallery.

It was the most fun I’ve ever had at an art gallery.

PS: Like having fun with hands-on art stuff? You’re going to love Kaboom! – The Port Moody Art Explosion, taking place April 5, 2014. It’s an event being organized and planned by a passionate group of artists, so you know it’s going to be a blast.

10 thoughts on “Crash! And then there was Silence”