A collet is something that most of us take for granted.  Besides knowing that it is sized to hold the bit, what else is there to know?  Recently, I took the time to have a closer look at collets… after I dropped one on the floor…

Most routers sold today come with a self-releasing collet.  This is a great feature that should not be taken for granted.  When removing a router bit from a self-releasing collet, first use the wrench(es) to loosen the collet.  Some routers use two wrenches, others use one wrench and an arbor lock, and some give you both options.  After using the wrenches, you will be able to continue loosening the collet by hand.  Then the collet will lock up again and you will need to use the wrenches again.  This is the self-releasing feature.  To understand why the threading seems tight, loose, then tight again, we need to have a closer look at the design of the collet.

The collet has a round bore in the center equal to the diameter of the shaft it is designed to hold (commonly 1/4″, 8mm, or 1/2″) and one or more slits along the length to allow it to expand and contract.  The body is tapered so as it is pushed down the router’s hollow spindle, the hole in the center closes, securing the bit.

Another design of a self-releasing collet uses a spring clip to lock the collet into the collet nut.  An advantage of this is that the two parts won’t separate when you drop them. 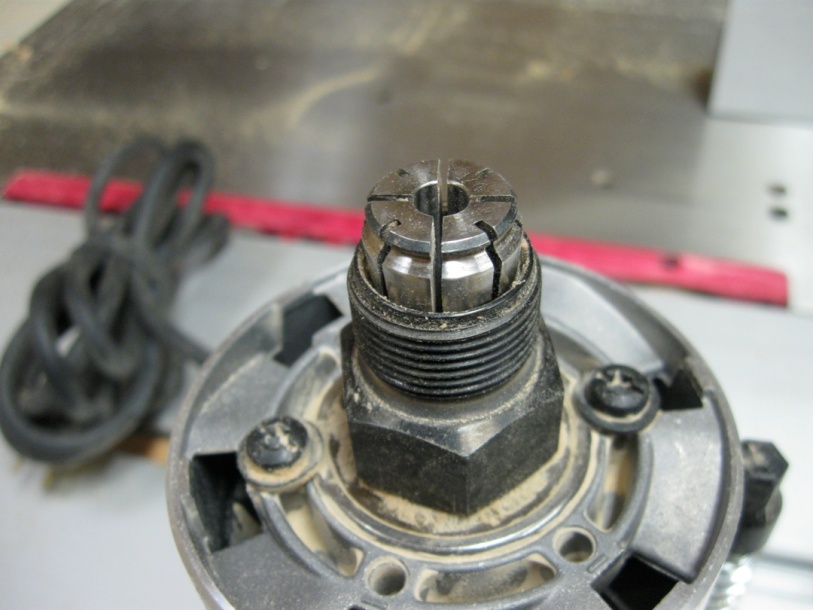 To install a bit in the router, first thread the collet on by hand until you meet resistance.  (It is ill-advised to tighten an empty collet as you may cause damage).  Then insert the bit.  The general rule of thumb is to insert at least twice as much of the bit’s shank as the bit’s diameter.  For example, if you are using a 1/2″ shank bit, aim to have at least 1″ inside the collet.

If the bit slides freely in the collet, making it difficult to tighten the bit with the desired projection, try either tightening the collet a little more before inserting the bit or laying the router sideways.

Finally, tighten the collet using the wrench(es).  If two wrenches are required, try positioning them so the handles are a few inches apart and squeezing them together using one or two hands.  Keep your fingers and thumbs on the outsides or else you risk pinching them.  This is more dangerous when loosening the collet and the resistance can suddenly disappear.

Tightened well, collets provide a secure clamping force that also ensures that the round item is centered perfectly.  I’ve only once had a bit slip in a collet.  It was a 1/4″ spiral up-cut bit and I hadn’t tightened it properly.

Other places you might find a collet in your shop include rotary tools and precision lathes.