This is the second post on the construction of my Table with a Twist.  The first post covered the making of the legs.

I had initially thought about making the aprons square like the legs because I knew how to twist a square blank and wasn’t sure how a rectangular blank would work.  I experimented with different apron designs and settled with a quarter twist (right photo).

However, I realized that having a 2″x2″ apron would not have offered enough support for the legs and I did not want to incorporate a stretcher below, as I felt that a stretcher would distract from the shape of the legs.  Using a wider apron provided greater racking resistance.  Before I laid out the twist in the legs, I had determined how wide (high) I wanted the aprons to be so I kept that area of the legs flat and untwisted to keep joinery simple.

I wanted the base to flare outwards towards the back as well, so that meant the ends of the side aprons needed to be cut at an angle.  Also, the front and back aprons needed to be cut at different lengths.  I wanted the flare to be subtle and I laid out a pleasing angle by eye which was only a few degrees.  I used my Domino joiner set to cut mortises for the largest Domino floating tenons which were 10mm (3/8″) thick and 50mm (2″) long.  I cut three mortises in each apron end and the inside faces of the legs.  To minimize the chance of errors, I cut all 16 top mortises first, then reset the Domino’s fence to cut the middle mortise, then reset the fence once again for the bottom mortise.

Then I dry-fitted the joints.  They were tight and perfectly aligned.  Because the Domino floating tenons were such a snug fit, it was work to get the dry joints together and apart.  That was what I wanted.

Next, I laid out the quarter twists which was as simple as drawing lines from corner to corner on all four faces.  I wanted to carve the twist on three surfaces, though only two surfaces are visible.  If I were only carving the two visible faces, I would have drawn diagonal lines on the two edges and one front face.

Unlike the legs, I elected to twist the aprons all the same direction – clockwise.  Then I carved to the lines using my drawknife.  As before, I finished up with a spokeshave.  To hold the aprons while carving them, I put the bar of a parallel-jaw clamp in my vise and used the clamp to secure them from the ends.  This gave me full access to the carved sections.

On the short aprons, I ran into an unexpected challenge.  Because I was carving a quarter twist in such a short piece, the twist was sharper than any I had encountered before.  This meant that my drawknife was of limited use and my spokeshave was even less useful because of the length of blade or sole of the tool.  I did what I could with my drawknife, then went to carving gouges, rasps and card scrapers.

Once again, I dry-fitted the carved aprons with the legs.  The back apron, which was not carved, was yet to be fitted. 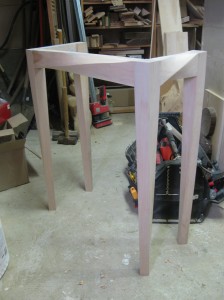 Next week, I will detail the construction of the top and finishing.

2 thoughts on “Construction of “Table with a Twist” – Part 2: Twisted Aprons”