Last week, I worked at the Coquitlam showroom of Lee Valley Tools Ltd. demonstrating the Festool power tools.  I was given a stack of pine and a set of plans for Megan Fitzpatrick’s Shaker-inspired Step Stool which appeared in Popular Woodworking’s column, I Can Do That.  Over the three days, I had time to build two stools. 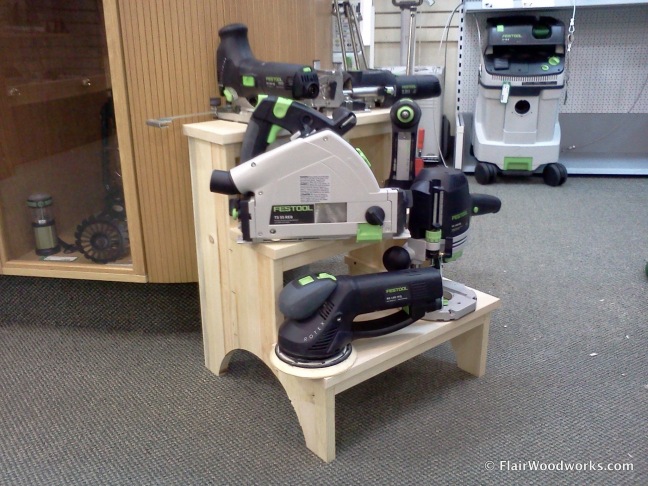 The design was simple – too simple.  It needed something else to elevate the project to the next level.

After some deliberation, I decided to carve some paw prints into the stool’s treads.  From the Animal Tracks guide I selected a paw print and asked another Lee Valley staff member (hi, June!) to sketch the shape proportionate to the width of the treads.  I positioned photocopies of her sketch on the treads, then taped them in place with packing tape.

To carve the design, I installed a 1/2″ core box bit in Festool’s mid-sized plunge router, the OF1400.  A smaller router would have been more agile, but I liked the idea of the additional mass which I thought would give me more control.  I set the plunge depth to about 3/16″ and routed a test piece (which you can see under the bottom step in the picture below with the photocopy still attached).

I found that I had good control plunging the bit to the full depth and moving the router around with two hands on its base.   I focused on the perimeter first, then removed the waste from the centre area.

Happy with the setup, I routed the three treads, working up to the lines of the sketch.  Then, I removed the photocopies. 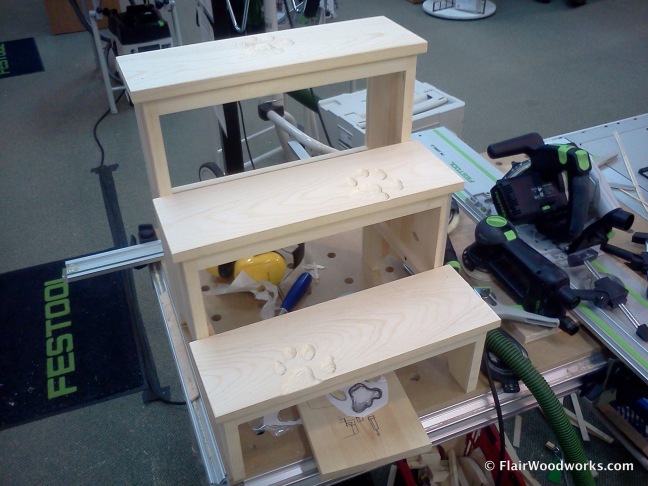 I wasn’t concerned with following the lines exactly, but wanted each paw print to look similar.  The shape of the core box bit didn’t leave a flat surface which I preferred.

I found it amusing that during the course of three days demonstrating Festool products, the largest crowd I attracted was while carving these paw prints with the router, which is, perhaps, the loudest of all the tools.

In other news, I wrote two sidebars which appeared in the latest issue of Canadian Woodworking (issue #84 – June/July).  Find them on pages 12 and 30.

8 thoughts on “I Can Do That with Festool and Flair”