It may seem odd to some, but the truth is that one of my greatest inspirational sources is Lee Valley’s hardware catalog.  Many hours I have spent poring over the pages – mainly the Specialty Hardware and Small Box Hardware, but also the knobs, pulls, and other assorted hardware.

This was the case about a year-and-a-half ago.  I flipped the catalog open to a page and found myself looking at a page of finely made butt hinges made by Brusso.  Brusso Hardware is a company which has dedicated itself to creating high quality brass hardware for the woodworker who demands the absolute best.  As I marveled over the classic design of the butt hinge I began to think.  The hinge is a truly classy piece of hardware.  When installed, with the door closed, only the barrel (the pivot) is visible.  If the right finish is chosen, the barrel will either blend right into the woodwork or provide contrast, thus drawing attention to itself.

We must go back to the sixteenth century to fully appreciate the butt hinge.  According to Witold Rybczynski, in his book One Good Turn, he estimates that butt hinges were first used around this time.  At that time, strap hinges were the more common hinge.  They are usually mounted to the surface of the door and can simply be nailed in place.  This would be sufficient to resist any forces applied by the door.

However, because butt hinges are mounted to the edge of the door, all the weight of the door is pulling in the same direction as the fasteners used to secure the hinges.  For this reason, nails simply would not hold.  Remember, at this time, screws were not mass produced.  Each screw had to be made by hand, one at a time.  This meant that the quality of screws was very inconsistent and each screw was expensive.  As a result, they were only used where they were absolutely necessary – where a nail simply would not do the job.  So as butt hinges gained popularity, demand for screws increased.  Soon, inventors began coming up with ways to produce screws faster and of better quality.

Butt hinges represent a certain level of quality.  Not only does the quality of the hinge have to be good, the craftsperson must precisely mark the location of the hinges, cut the mortises to the correct depth, and mount the hinges squarely.  I wanted to make something that would bring attention to what many people know as just “a hinge”.

Then it struck me.  What if I were to make a butt hinge, say, 1″ thick.  For the proportions to look right, it should be, say, 2-1/2″ wide and… say, 3-1/2″ to 4″ long.  For the next year and a half, I ran this through my head hundreds and thousands of times, each time refining the proportions and the process of how to make it.  I also spent a considerable amount of time thinking about what is should contain.  A deck of cards?  A stack of business cards?  That thought is still playing over and over in my head as I write, for I still don’t know.

But last night, all that thinking and virtual rehearsing paid off.  In less that 2 hours, I had converted a vision into reality.  The result:  the Tribute to the Butt Hinge.  It’s just a mock-up – I’m sure to modify it somehow.  For now, the dimensions are 3-3/4″ by 2-1/2″ by 3/4″ thick.  What do you think?  I think this just might be the ticket.  The ticket for what, you ask?  Perhaps the ticket to millions… 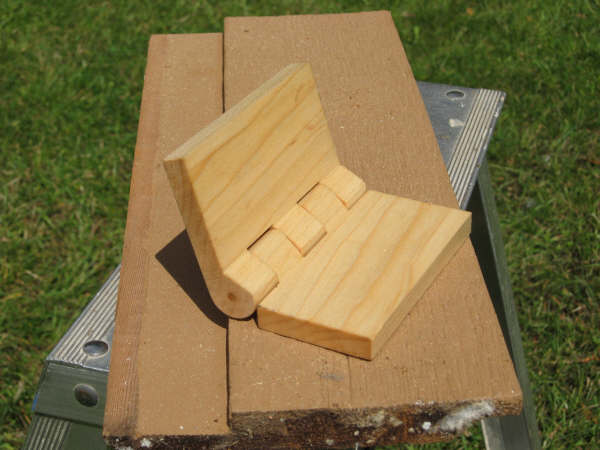 One thought on “Tribute to the Butt Hinge”