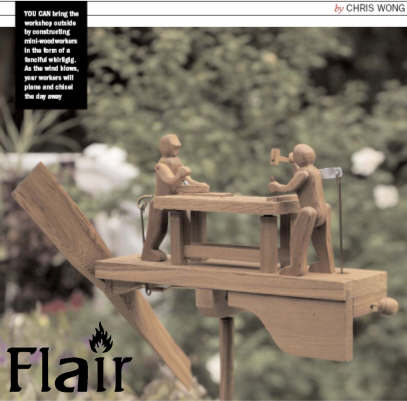 Last summer, Jodi Avery MacLean, the Managing Editor of Canadian Home Workshop Magazine (CHW) contacted me asking if I was interested in building them a whirligig.  Truth be told, I was hoping that they’d ask me to build them a piece of furniture such as a side table or dresser, but I was excited nonetheless and promptly responded with a resounding “yes”.  I took a few days to get my grand idea together.  I was familiar with whirligigs though I had never built one.  I knew that there were two main types:  simple and complex mechanical.  Simple whirligigs typically consist of a body with two propellers on the sides for arms or legs.  Mechanical whirligigs use a propeller connected to a camshaft to control one or more characters and are much more elaborate and time consuming to construct.

Given that this is my first assignment for the magazine, I knew that I had to make a strong impression and immediately cast aside the idea of a simple whirligig.  I scan through the books in my local library revealed no shortage of ideas and plans for a mechanical whirligig.  However, trying to impress, I decided to design my own whirligig from scratch.  My grand idea was to have a scene from the wood shop:  one woodworker uses a jack plane to surface a board while the other chops a mortise in another board.  With the idea fresh in my mind, I drew up a quick sketch which I later turned into a 3D model using a CAD program called Rhinoceros 3D.  I sent a screenshot of my idea off to Jodi to be reviewed and turned my attention to working out the details.

The building went surprisingly well, although it took a bit of patience to get everything working smoothly.  The idea of having my project published, however, was more than enough of an incentive to keep working at it (If you want the details of how to build it, check out the magazine!).

Once the building was complete, the writing began.  I began by making detailed notes, documenting every step involved.  Then I took those notes and converted them into sentences and paragraphs – the first draft was complete!  Eight drafts later, I had an article which I was completely happy with.  I sent a copy off to Jodi at Canadian Home Workshop electrically and mailed the whirligig across the country from Port Moody, BC to Toronto, ON.  Upon receipt of my handcrafted work of art, the staff at Canadian Home Workshop were very impressed.  Mission accomplished!

About a month and a half ago, I started working together with Jodi Avery MacLean and Steve Maxwell (CHW’s technical editor) to edit the article and illustrations.  I compared Draft 9 with the final draft and only found a handful of changes the folks a CHW had made.  And each edit was minor – adding or changing a word here and there.  This meant that the nine drafts I had meticulously pored over for so many hours had been worth every minute, with the result being an article which I can call my own.  It was just a matter of time before the magazine with my article hit newsstands nationwide – and that time has arrived!

Get your copy today!