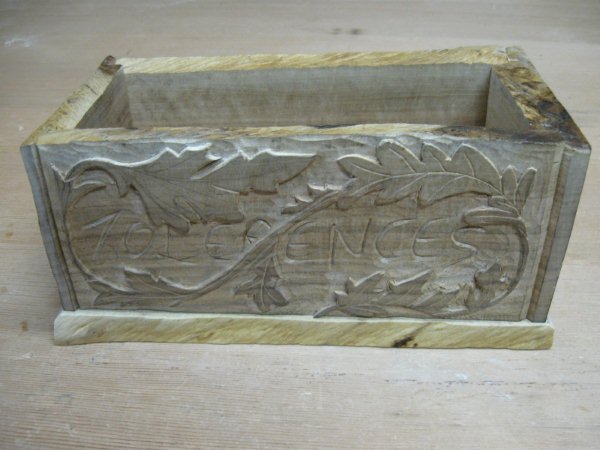 This box was built from butternut using only hand tools. I started with green boards of butternut and planed them down with a jack plane, cut the half-lap joints with a chisel and skew-rabbet plane, and glued and nailed the joints. I glued and nailed on the bottom with two nails – the other two nails were docked and only serve to keep the box from rocking. Everything was laid out using my eye and a carpenter’s pencil. No tape measure, no ruler, no marking knife.

Carving the four sides took about five hours in total. The ends each took about 8 minutes to lay out and carve, the back about 12 minutes. Yes, the relief carving on the front took a lot of work. This box started out as a simple, fun project but escalated to a much more involved and meaningful one.

Tolerances have been at the forefront of my mind for months. Nowadays in fine woodworking, it seems as if everyone strives for perfection. Boards must be four-squared (faces parallel to each other and edges square to the faces), joints have to be seamless, and everything has to be perfectly smooth. That is the result of tight tolerances. If we let tolerances slip and an edge is not straight, a joint does not fit well, or a surface is rough, it is easy to criticize the work.

But what if that edge was not meant to be straight? What if the joint was meant to be ill-fitting? Or the surface meant to be rough? If these characteristics were intended, then can it be argued that high tolerances have still been maintained and only the perceived result has changed? It is this question that I hope to answer with this box. Perhaps a better question is: “What is a flaw?” Is a flaw still a flaw if it was intended to be as it is?

Have a look at this box (yes, it’s better to see it in person). The wood has very nice colouring to it and the carvings were done very nicely. In fact, the joke is that I did too good a job on the carving. As you look closer, you begin to notice more.

There is one live edge along the front of the base. There are four live edges along the top edges of the box and none line up perfectly. Actually, one corner is out by over 1/8″, but the grain matches well at all four corners.

The front, back, and ends all vary in thickness. One even visibly tapers in thickness! Looking inside, you see that there is a long gap between the two boards which were glued up for width.

And from the end, the corner of one bottom board is chipped. The chamfer around the edges is irregular, but clean. There are a couple areas around the carving that look a little rough and the wood around some of the nail heads is partly crushed from over-enthusiastic hammering.

You set the box down and look at it again. Isn’t “tolerence” spelled with an “a”?

The second box in this series is called A Box Called “Necessessity”.

One thought on “A Box Called “Tolerences””