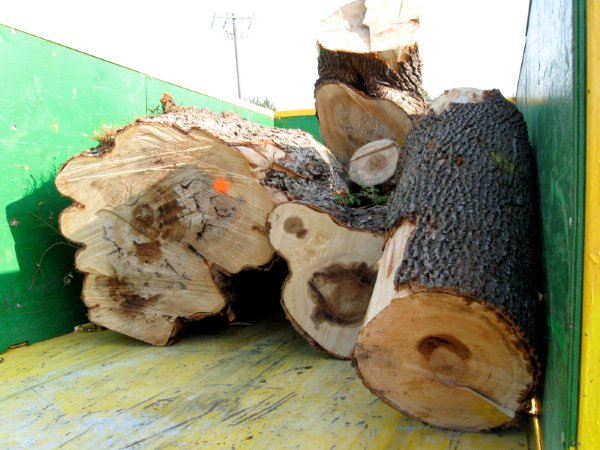 A few weeks ago, I received a call from my friend Dave. He had just gotten word that two large trees – a large Norway Maple and an even larger elm – had just been brought down. He asked me if I was interested in any of the wood and mentioned that the elm was about 15 feet long, from and the maple roughly 10 feet long.

At this point, I was just working through the last of the maple I had gotten from Dave over a year ago and was looking forward to working with some different woods. I told him that I was definitely interested in the elm, but not so sure about the maple. “I have a good feeling about this maple, Chris.” Dave continued. “It’s got potential.” I gave in (I seem to have this weakness for wood) and told Dave to go ahead and buck the logs to a workable length and have them loaded into his trailer.

Last week, Dave had the four halves (two maple, two elm) loaded into his trailer with a crane and he and I made a date to mill the logs Saturday. The past week had been hot, and we knew that Saturday was going to be no different. In an attempt to beat the heat, we met up at 7:30 am and drove to the empty lot where he normally mills lumber. Unfortunately for us, the open lot provided no shade other than from a telephone pole. Upon arrival, we removed the back gate of the trailer to facilitate unloading and I got my first good look at what we were up against.

Dave pulled his truck forward and the three bottom logs dropped to the ground. We used a peavey to roll the logs far enough apart to give us enough room to work. The first order of business was to unpack all the tools and equipment. We used a chainsaw with a 42″ long cutting bar equipped with a 48″ Alaskan Mill attachment. Dave uses a heavy-duty chain designed for strenuous ripping. It takes a monster kerf of 0.404″ (almost 7/16″).

The first cuts were done with the mill running along two straight aluminum rails, which effectively flattened one face of the log. For efficiency, we used the rails to flatten off all four logs first, then put the rails away, reset the depth of cut and proceeded milling.

Subsequent cuts were made with the mill riding directly off the last cut surface. As the cut progressed, we would insert wedges to keep the kerf open. Wedges were always used in pairs, one at each edge of the slab. Depending on the length of cut, we used up to six wedges. The first log we milled was the largest of the bunch – an elm. It was just over 36″ wide at the widest point.

Though Dave did most of the milling, we did a few cuts together, with one of us at either end of the mill to guide it through the cut. I timed a couple cuts, and with a sharp chain, these wide cuts in the hard elm took roughly six minutes. Though the first cut only revealed plain off-white sapwood, subsequent cuts revealed more and more dark, beautiful heartwood.

Each slab from this log, at 7′ long, 36″ wide, 2.5″ thick, and green, was all that the two of us could manage to get it into his trailer, one end at a time. When he built his trailer, Dave was wise enough to incorporate a steel roller at the back of the trailer which made our job of loading much easier.

After finishing the first elm, the biggest log to mill, we moved on to the second, smaller elm. We got a rhythm going and worked our way through the second elm and the two maples in good time. What really helped was that I was able to load each slab into the trailer myself. Dave manned the saw, I inserted wedges behind him, and at the end of the cut, I would load the slab into the trailer while he would start to mill the next slab. That way, Dave never needed to stop the saw. We did have to change the chain a few times though. In the first maple, we found some amazing colour. 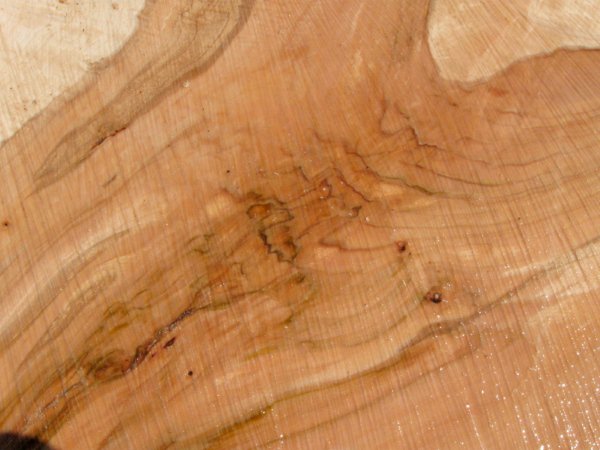 However, further down in the maple, we hit a nail and broke a tooth on the chain. We replaced the chain and carried on. At 4:30, we finished milling and loaded the trailer.

We retreated to Dave’s house and cooled down and rehydrated. The thermometer outside read 27 degrees in the shade. In the sun, it must have been 35 degrees. Nine hours of hard, physical work in full sun and 35-degree temperatures warrants a day off, if anything does. We went through 3 liters of oil, plus a many liters of gasoline, and five chain loops. Oh, but what a haul! (Now what am I going to do with all this beautiful wood?)