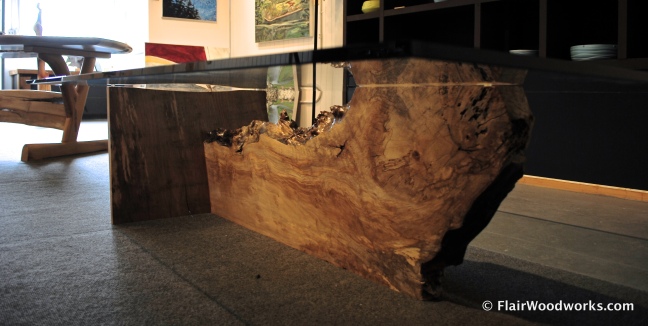 This table is for sale and has just been added to my Gallery.  It is one piece which almost never happened.

An Odd Start, If You Could Even Call it a Start

A few years ago, my wood guy, Dave Kilpatrick, stopped by unexpectedly.  From his trailer, he unloaded a live-edged slab of maple roughly 7 x 4 feet.  It was a miscut and, as a result, was severely bowed, cupped, twisted and tapered in both width and thickness.  “This is for you, Chris!  If anyone can do something with it, it’s you.” Dave announced.  Although I saw no potential in the wood – I did not think that it was worthy of even a photograph – I accepted it anyhow.

I let the piece sit just outside my shop doors for a while, hoping that it would speak to me and give me some indication of how I might use it.  Being as warped as it was, not to mention tapered in both directions, it would have been a formidable task to flatten it – only to end up with a 1/2″ thick board.  Sure, I could have cut it up into smaller boards which would be easier to flatten and produce a greater yield, but that didn’t seem to be the right thing to do.

Eventually, tired of having it sit around with no use in sight, I decided to move the slab to a corner of the yard.  To make it easier to carry myself, I cut it in half across its length with my circular saw.  Then I moved it into a corner where I didn’t see it for a few years, although I thought of it occasionally.

Then, one day while working in the shop, I had a sudden vision of the perfect use for the slab.  I found the two halves of the slab and brought them into the shop to acclimatize to the drier environment.

To fair the complex surfaces of the wood, I used short-soled planes and sanders (some day, I want to make a plane with a 2-3″ sole specifically for this purpose).  I joined the two pieces with a long sliding dovetail which was rock-solid.

My initial vision was to make a table base as seen in the picture above.  However, when finishing the table I needed to turn it over and I realized that it looked good with the long live edge facing up, too.  Ultimately, I decided to display the table in this orientation, although it could still be flipped for a different look. 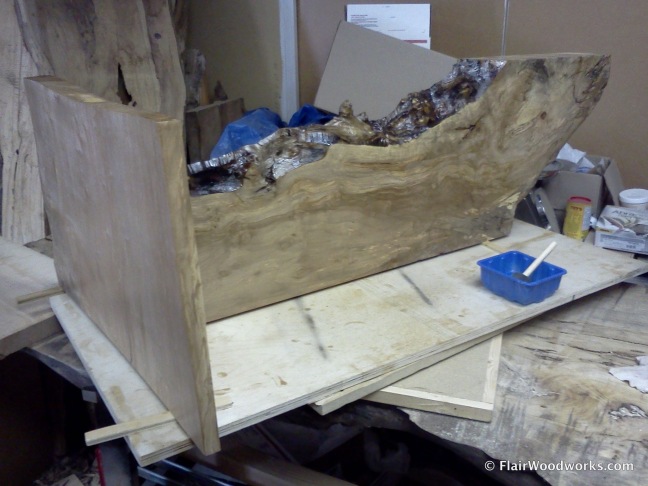 I could not be happier with the end result.  The design is very functional and the glass top showcases the uniqueness of the wood.  I brought the table to Gallery Bistro where I took the finished photographs and it got very positive feedback (and some serious interest).  It’s amazing to think that such an amazing table came from such an unpretentious beginning.

You can see more pictures of the completed table, as well as the specifications, on its product page.