Last week, after deciding to apply the cabinet back directly to the rear edge, I spent most of a day rehearsing and mentally preparing myself for the glue-up.

In this assembly, I only glued together the cabinet sides, top and bottom. I used 3/4″ x 3/4″ stickers as cauls to force the finger joints together as I applied inward pressure with band clamps. I used bar clamps to apply pressure to specific areas that needed some persuasion to close. 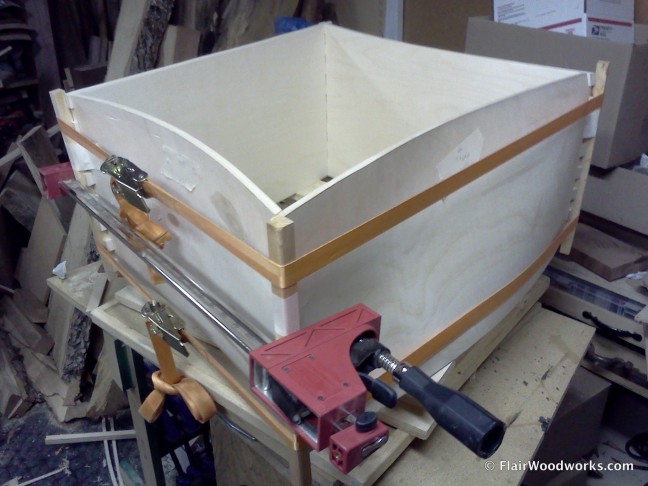 Once the glue dried, I planed the rear edge so that the back could mate well against it. I then laminated the back from three 1/8″ sheets of Baltic birch plywood as I’d done for the other cabinet parts. To give the back some shape, I stacked a few big blocks of wood in the middle of the cabinet and placed a thick piece of foam over top so that it was higher than the cabinet was deep. I applied glue between the three plies and clamped them to the back of the cabinet, over the foam. 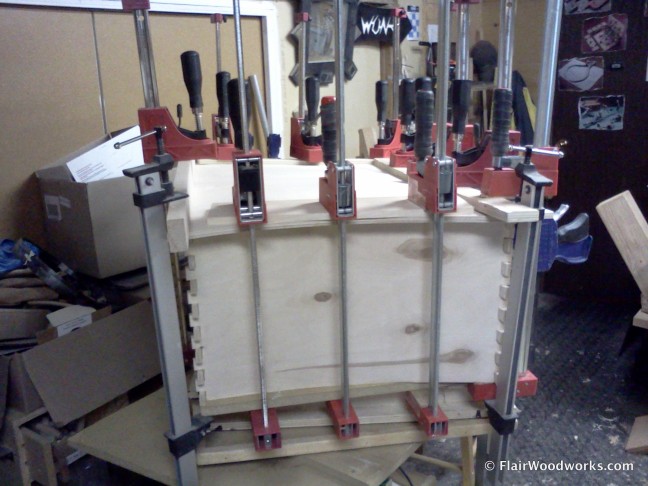 Because of the curvature of the panels, I wasn’t able to accurately locate the mortises if I used my Domino Joiner’s full fence as I would normally. Instead, I made a custom fence with limited surface area. This compromised my ability to register the tool on the face of the panel, so I needed to focus on steadying the tool as best I could. (This was nerve-wracking and very difficult with the smaller DF500 and would have been even harder with the DF700.)

With the mortises cut, I readied 17 Domino floating tenons and began the glue-up. Because of the many parts involved in this glue-up, it took a long time and the glue began setting before I got all the clamps in place. However, the tenons added strength and positive alignment, so I still felt they were worth the extra stress.

Finally, I finished trimming the back panel even with the cabinet.  I used a spokeshave, card scraper, and sandpaper. 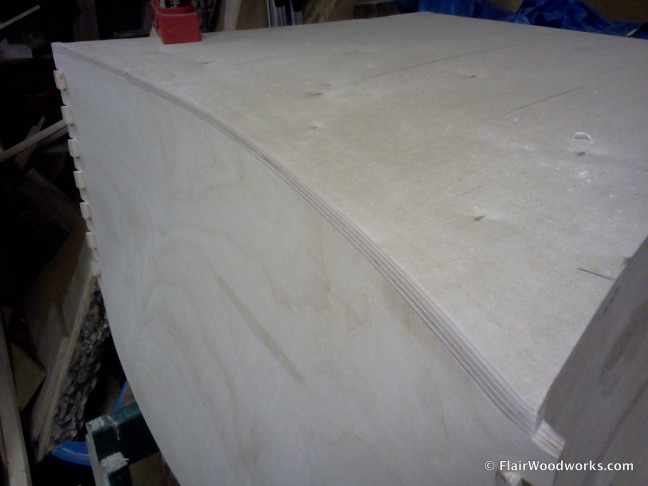 Here’s what the cabinet looked like from the back with the rear panel installed.

What’s next? Let’s see what the doors look like on the cabinet!